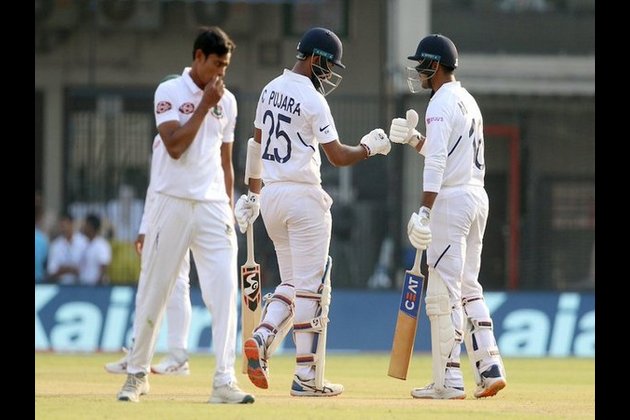 Indore Test: India bundle out Bangladesh on 150, trailing by 64 runs

Indore (Madhya Pradesh) [India], Nov 14 (ANI): India were trailing behind 64 runs at the end of play on the first day after bundling out Bangladesh for 150 in their first innings at the Holkar Cricket Stadium here on Thursday.

India scored 86 runs with a loss of one wicket after the play ended on day one. Opener Mayank Agarwal and Rohit Sharma came in bat for the hosts.

Cheteshwar Pujara joined Agarwal in the middle and built an unbeaten stand of 72 runs for the second wicket. Pujara and Agarwal will resume their innings from 43 and 37 runs respectively on day two.

Earlier, Bangladesh opted to bat first after winning the toss in the first Test of the two-match series.

Bangla Tigers suffered a double blow in the innings as they lost their openers Imrul Kyles (6) and Shadman Islam (6) cheaply.

Mohammad Mithun and skipper Mominul Haque built a brief-stand of 19 runs for the third wicket. Mithun was picked by pacer Mohammed Shami in front of the wickets after scoring 13 runs.

Mushfiqur Rahim joined Haque in the middle and provided a steady partnership of 68-run for the fourth wicket before the latter was scalped by Ravichandran Ashwin.

The last recognised batting pair of Bangladesh Rahim and Liton Das built a stand of 25-run before Rahim (43) was sent back to the pavilion by Shami reducing Bangladesh to 140/6.

After Rahim's dismissal, Bangladesh kept on losing wickets at a regular interval and were all out on 150.