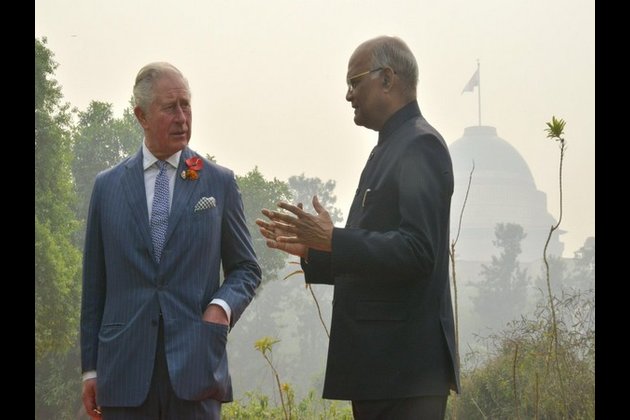 The final engagement of the visit witnessed the Prince of Wales celebrating his 71st birthday in a simple and brief function at Mumbai's iconic Taj Mahal Hotel with school children who have benefitted from support extended by British Asian Trust.

The Prince began his visit on November 13 by presenting a Commonwealth 'Points of Light' award to Keralan Jolly Johnson, the founder of the Helping Hands Organisation (H20). Under Jolly's leadership, H20 built a centre for disabled children that runs therapy sessions, vocational training and family counselling. The organisation was also actively involved in dealing with the aftermath of Kerala's devastating floods in 2018 through its rehabilitation programme.

He then next visited the Indian Meteorological Department to discuss India's weather forecasting systems. The Prince was given a tour of the Control Room, showcasing how the Centre operates to forecast, track and respond to cyclones and other potential disasters, including the latest cyclone Bulbul in Bangladesh.

"There he heard from Sunita Narain from the Centre for Science and Environment about India's solutions to air pollution and met with three winners of the Ashden Awards, who demonstrated their innovative technologies," the High Commission said in a statement.

The Prince of Wales was shown an innovative e-rickshaw charging station designed by SunMobility before being taken for a spin in one of the e-rickshaws by Mariya - one of the female drivers working with Ashden winner SMV Green.

He then held a bilateral discussion with the President Ram Nath Kovind, where they noted their mutual interest in green issues and traditional medicine, as well as the important role of the Commonwealth. The President gave the Prince a tour of the herbal garden, where the latter planted a Champa tree in his name.

In the afternoon of November 13, the Prince visited Gurdwara Bangla Sahib, where he was welcomed by representatives from across the Sikh community and was given a tour of the langar kitchens, as well as the opportunity to try his hand at chapati making.

He closed the day at a Service of Remembrance commemorating the sacrifices of soldiers from India, the UK and across the Commonwealth in World War One and World War Two. Marking the 75th anniversary year of the Battle of Kohima, the Prince recited the Kohima Epitaph and laid a wreath of Khadi poppies, made by members of the Royal British Legion in the UK.

He visited a number of graves of those who lost their lives in Service, including that of Army Medic Sergeant Henry Bombroff, whose 80-year-old son Bill, was present at the event.

Upon his arrival in Mumbai on the following day, the Prince joined a British Asian Trust meeting to gain an update on the work of the Trust in India. The meeting included discussion around the Quality Education Development Impact Bond.

He then attended a discussion with influential Indian business leaders on how to accelerate a transition to sustainable markets. Senior attendees representing finance, transportation, technology and life sciences explored how to connect sustainable investors to sustainable opportunities around the world.

The Prince also had the opportunity to meet artist Haribabu Natesan whose artwork - made of recycled material was on display during the meeting. (ANI)